When I was little, I always remember my grandma, and to a lesser extent my parents, saying something like, “Kids these days”, in a negative tone, showing their displeasure of the direction society is taking. Now at only nineteen years old, I hear myself saying the same thing sometimes. My two main jobs both include dealing with children. The first is a hockey and skating instructor, where I could be teaching kids anywhere from three to twelve years old. The second is my volunteer job, which is teaching CCD to seventh graders.

By studying their habits and personality, I find myself asking, just where is society headed? It’s not just little kids, but people my age and older as well. Brett Bodner, of From Warm-ups to Tuneups, and I were having this conversation just the other night. We can both agree that the old saying is correct, and we are all “going to hell in a handbasket”. But just where did this all begin? This me-first attitude, where people don’t give a damn about anyone but themselves, and will go out of their way to get what they want, even if it means putting others at risk. There are many factors, such as parenting (which I won’t dare tackle), movies and television, and outside influences. But the one factor that many ignore is youth sports. I was playing hockey, baseball and basketball when I was growing up, starting each one when I was around six years old. This would have put the year at about 1997, which was a few years after youth sports started entering a downhill spiral. 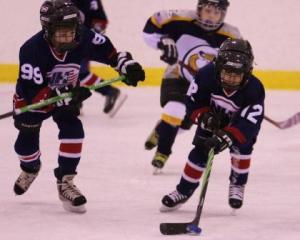 From that moment on, no one in my generation, or the generations to come, will know what it is like to lose in a competitive setting when growing up (middle and high school sports being the lone exceptions). This is because the adults and coaches go out of their way to ensure that no one is upset. Everyone must have fun, and to do that, we cannot have a loser. We must make sure games end in ties, and if they don’t, that no one’s feelings are hurt. This includes every team getting a trophy at the end of a season, regardless of record during the season.

Even when I was little I wondered, “Why should I try hard if I’m going to get a trophy no matter how good I do?” Of course we all try our hardest to win, but if we lose, big deal. We are still getting a trophy. It was not until I was in sixth grade that the local baseball league gave out a trophy for the first place team that was larger than all the others. This was a big deal at the time because it was unheard of. I stopped playing little league shortly after, so I do not know if that tradition continues to this day, but if I had to guess, I would say no. Some parent probably complained that their child suffered psychological damage because he was on the losing team, and actually had to witness the winning team lifting up a larger trophy.

Back in the old days was when youth sports were in their prime, my father grew up on Staten Island playing baseball, football, and stick-ball underneath an overpass on Hylan Boulevard well after the streetlights came on at night. For the leagues he was in, he recounted that the games were competitive, and trophies were given out to the winning team, and the winning team only.

“You either won or you lost,” he says, “There was nothing in between. The winner got the award, and the loser went home. No one cried, no one was traumatized. We were upset, naturally, but it just made us all the more pissed off and wanting to try even harder to win it next year.” This all directly feeds into the me-first mentality. Children grow up today getting rewarded regardless of if they fail or succeed. They don’t get to taste disappointment until they play middle and high school sports, and by that time, it is too late.

Even now as an instructor, we find ourselves trying to get games to end in ties, especially when the kids are young. After one time, when they faced us and we let them win, they started jumping around and yelling. Gloating is one thing that also did not happen “way back when”, or at least not to the extent it happens today. I turned to the other counselor and said, “Next time some losing will do them good.” He agreed, and the next day we beat them. Over the course of the four-day camp, we won twice, and they won twice. It may seem insignificant to an outsider, but I must declare their attitudes were much different by the end of the week. That’s the one thing I love about this job. I wanted it, obviously, because I love hockey and getting paid to play it is something of a dream job for me, since I’ll never make it to professional hockey. But the other reason I wanted it is to get a look at the psychology of children, to study their habits, and gauge their behaviors.

After one game that the children lost, one kid started to cry, and since it was near the end of camp, his mother was there. I thought to myself, “Oh, here we go.” But instead she jumped right on him, told him to stop crying and win next time. Hockey and crying, she said, are two things that just don’t go together. It was then I had a little moment of victory inside and felt that maybe all hope isn’t lost just yet.

But still, how many times do we see it when a parent intervenes and jumps down the throat of a coach, telling him how to do his job. When it comes to baseball, “How come my child is batting last?” Or hockey when, “How come my child isn’t getting as much playing time as John Smith’s child?” One of these days I want the coach to just respond, “Because your kid sucks!”

But no, we can’t say that. We can’t tell the parent that even though you signed your child up for a roller hockey team when obviously he has no interest, can’t skate well, and couldn’t hit the ocean if he was standing in a boat, that that is the reason why he is getting limited playing time. Why can’t we say that? Maybe cause we don’t want to hurt their poor little feelings, or even have lawsuit on our hands.

Nope, just ask the president of the Greater Toronto Sports League, John Gardner, as well as four team coaches who were sued by parents of two children because they were cut after a tryout for the team and did not make it. The amount of money in the lawsuit was a hefty $25,000 each.

This was the reason given for the lawsuit: “Their direct actions have caused irreparable psychological damage to Daniel Longo’s self esteem as an impressionable teenager and demoralized Daniel as an athlete and team hockey player with his peers. The conduct by all defendants destroyed the dignity of my son, whom in good conscience gave his team nothing but his best efforts.” Maybe in your son’s “best efforts” he still sucked was not good enough to make the team.

You would think that with an accusation like that, the two children were personally targeted and let go because the coaches didn’t like their last name, but 70 kids tried out for a team that only required 17 skaters. So that means 53 children left broken-hearted. Maybe they should join the party and sue too. Perhaps the worst (or best, depending on how you’re looking at it) example of babying our young athletes comes from my friend Jeff Huber, who just recently went to his 13-year old niece’s T-ball game. When it was over and he went down to the field, he asked her who won. She responded that she did not know. He asked her how could that be possible, and asked if she was paying attention. Her response was, “We don’t keep score.” Jeff was taken aback by this sentence. Don’t keep score? Then what the hell are you even playing the game for?

She then went on to say that each game ends in a tie, and no runs and any stats are counted. He told her from now on to keep score in her head, so he can at least get some satisfaction that someone cares about the integrity of the game. The reason why this all ties into one’s upbringing, is because if a child is used to everything going his or her way and getting rewarded no matter how bad they are in a particular area, they will expect these rewards to carry over into the real world, when adulthood rears its ugly head.

But the reason why this does not carry over, is because 95% of the generation is the same way, so if everyone is me-first, where does the caring for other people come in? It doesn’t. There used to be a time when you could trust people, regardless of how much you knew them. That time is over, simply because people just do not care. When was the last time someone held a door open for you? And if you held a door open for someone else, when was the last time they said “Thank You”? I consider myself a good person, and hold the door open for people if they are close by. If they choose to not acknowledge me, I will say, “You’re welcome” anyway. Just try that next time, it always gets them to look at you.

So to all parents out there, next time you play a board game with your young child, don’t simply let them win, make them actually try to beat you. To coaches, let inter-squad games end with a winner and a loser, and to those who have children on a competitive team and they lose, don’t sue the coach, get right on their backs and tell them to stop crying, and to win it next year. We all love to win. Whether its sports in gym class, or the championship game of the highest level league you’ve ever played in, those that love sports love to win. But sometimes a little bit of losing will go a long way in helping a young player learn. This includes giving out a trophy to only the winning team, and nothing to the losing team except a handshake and a, “Well, you tried. Go get ’em next time.” It is better that they get used to losing as a child on a ball-field than in the real world as adults, when reality will make them feel like they got hit by a truck.