Due to the popularity of Volume 1, which was building an inoffensive snowman, tonight, we will tackle a much more deeper aspect of the holiday season, which is Santa Claus. With the help of a friend, Bill Ritter (NOT the anchorman on ABC Eyewitness News), we set out to destroy the character that gives millions of children all over the world joy every December 25th, to serve our own personal, and politically correct agendas. 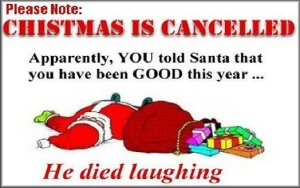 Like what you’re reading? Let us know! You may spark us for volume three!