In honor of Mark Messier’s 50th birthday (can you believe it?) I have decided to dig up the interview I did with him nearly two years ago to the day, when I was in contact with him through his helmet company and ‘The Messier Project”, who were more than helpful and accommodating in allowing this seventeen year old to interview a legend. Please enjoy… 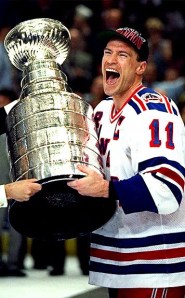 In late December, I got into contact with The Messier Project, to find out a little more information on what new technology they were offering, by way of their groundbreaking helmet design, that was made to help lessen the astronomic amounts of concussions that are sweeping through the National Hockey League. They were more than accommodating, and sent me several press releases full of interesting facts that I relayed to the readers here at Metro in this article.

They also promised me the opportunity to interview Mark Messier, the driving force behind The Messier Project section of Cascade Sports, the company that is producing these helmets. I was excited for this chance, but also realized that due to Mark’s busy schedule, that this interview may not ever come to fruition. But over the last several weeks of being in contact with their public relations department, this interview has finally been realized. The questions I asked have been answered. Mark and I discussed his new helmet technology, injuries in the NHL, his career in hockey, and more, in our interview below.

But before I get to the interview itself, I just want to thank Mark for taking the time out of his busy schedule to answer my questions, and also to Audra Silverman, the public relations specialist for TMP, who helped set this up.

GC: This year, more than any other, we have seen so many injuries, including many concussion problems. Can you tell our readers how your helmet will help to decrease the number of head injuries in the sport?

MM: Concussions have crept into the game of hockey and I strongly believe we need to find a way to address the issue, which has become an epidemic. For me, the mission of The Messier Project is very much about changing priorities. The fact that we are still basically using the same technology in our helmets that we have used over the last three decades is horrifying. Every single piece of equipment has evolved except for the helmet. I joined forces with Cascade Sports to create The Messier Project, a product development and public awareness campaign that aims to address the issue of concussions in the sport of hockey.

Cascade Sports have been leaders in head protection for more than twenty years. It was their history of innovation and the company’s revolutionary Seven Technology that brought me to the table. I knew that I could work together with Cascade Sports to bring a player’s perspective to the design and development of the new M11 hockey helmet, the first product offering of The Messier Project. Seven Technology is a cutting-edge liner system utilizing a ground-breaking impact attenuation system to more effectively manage energy transfer from direct impact. On impact, Seven Technology compresses to laterally displace energy, and within seconds, it completely resets to be ready for the next impact. Hockey is a multiple impact sport and Seven Technology’s “total material reset” makes it the first “true” multiple impact technology.

The M11’s Seven Technology, new Mono90 Shell Design, and Pro-Fit System contribute to the protection and performance that drew NHL stars including Chris Phillips, Aaron Ward, Matt Bradley, Stephane Veilleux, Jesse Winchester, and Garnet Excelby along with the Harvard Men’s Ice Hockey Team, and more than a hundred elite and recreational hockey teams from junior to youth across the Unites States and Canada, to join The Messier Project. The M11 helmet, with its Seven Technology liner system that more effectively manages multiple impacts, is the first step in moving our sport in the right direction. But we need to go beyond product development alone.

GC: In youth hockey, we are seeing more and more children getting injured. Concussions that were never an issue are now a major problem. Why do you think that youth hockey is becoming increasingly violent? And is it a result of more intensity in the sport, or just a lack of regard for other players’ safety?

MM: This is something that I am very passionate about, though I don’t think the issue is that the game is becoming more violent. The fast-paced, physical nature of hockey is what makes it exciting, and it is an integral part of the game. But I think it is extremely important that we teach our kids at an early age how to hit, how to take a hit, and how to respect each other both on and off the ice. It is part of our responsibility as youth coaches, mentors, and stewards of the game to teach our kids this part of the game, so later on, as they move through the sport, they become responsible for taking their safety into their own hands. We have changed the rules and many are working to eliminate checking and hitting to make the youth game safer. But eliminating this aspect of the game, even at the youth level, does more harm than good in my opinion. By trying to protect our kids with rule changes that define how we can hit, when we can hit, and where we can hit, I think we have given our youth players a false sense of protection, and in turn they have lost the protective instincts that are so important to the sport of hockey. It is these protective instincts that must be fostered and taught at such a young age.

I have perhaps a different perspective on this than most, likely because of the era I grew up and played youth and minor league hockey in. I grew up playing countless hours of shinny on the outdoor rinks in my hometown. I grew up playing hockey knowing full well that I had to protect myself at all times. You cannot expect everyone to play by the rules. With this cemented in my mind at an early age, I moved through my career playing twenty years as a minor league hockey player and twenty-six years as a professional. Today, I think that by trying so hard to protect our kids, we have left them defenseless. Our game will never be one that is danger free, but players don’t go into a game thinking they are going to get hurt. The speed at which the game is played, along with the power that is generated, has never been higher. We need to arm our kids with the knowledge of how to protect themselves at all times, and in different situations. The earlier we do this, the better. It is all about balance between teaching safe play, protection instincts, and making equipment decisions that best protect our players.

One of the missions of The Messier Project is to work with the players, coaches, parents, and the game’s stakeholders, across all levels, to encourage safe play. While better equipment and new technology, such as the M11, do help better protect players, it is only part of the solution. Encouraging safe play is extremely important and I think that teaching kids how to give and take a check is critical.

GC: Looking back at the “Golden Age” of hockey, can you imagine yourself ever playing without a helmet? And how come it seems that there were less injuries back then, even though players wore a lot less equipment than they do today?

MM: My father has always been my mentor, and he was one of the first players to wear a helmet (before it was mandatory) when he played – so from a very early age I knew the importance of wearing a helmet. I started with Jofa (because Wayne was wearing it) until I got in a fight and got cut for eight stitches in the forehead. From there, I tried to find the most protective helmet I could and opted for the old Winwell, which came down low on my eyebrow and sideburns. I actually tried other helmets over the course of my career, but none offered any additional protection, so I stayed with the Winwell my entire career.

I am excited to be working with a company that has a focus on protection. The M11 offers players today a reason for a change, not only because of the performance of the helmet, but because of the technology that helps to reduce the risk of concussion. Our game has evolved so much since my father’s playing days – and my playing days. It seems there are more injuries today but there are many contributing factors, including how fast our game has become. You could make a good argument about the size of the ice being too small. However, I think many factors combine to create the current environment. It is a chain of events over time that has led to where we are today.

The evolution of equipment is a factor. Protective pads today are lighter and more rigid, especially shoulder and elbow pads. I believe the changes in the playing area have potentially contributed to the issue. The glass and boards have become too rigid, and what was once a normal body check is turning into a concussion. The athletes of WWE don’t wrestle on a concrete floor. We need to soften the playing area and examine our equipment standards. I also believe it is up to the players to protect themselves at all times. I see too many players leaving themselves vulnerable, expecting opposing players to turn away. The NHL is a game that is played with high intensity – there is a great deal on the line for every player and organization. And that I feel is part of what makes our game great. However, our players need to take responsibility as well. To a certain extent, I believe our players have lost the necessary survival instincts because of the rules put in place to protect them, and these rules have given players a false sense of security.

From a broad perspective, I think we need to evaluate each of these changes and the impact they have had on the game, with a focus on moving forward and looking at ways to reduce the risk of player injury. The game has evolved and has continued to evolve – but there is a delicate balance between allowing the game to evolve and maintaining the heritage and tradition that makes hockey the greatest game of all.

GC: Finally, can you tell us a little bit about your job as special assistant to Glen Sather? And do you have any aspirations of becoming an NHL GM in the future?

MM: It is a huge honor to be working with the Rangers as special assistant to Glen Sather. I am really excited to be back in the game and this opportunity with the Rangers means a lot to me. From an organization standpoint, I really enjoy the team development. I believe I have a good understanding of the challenges of playing in New York and what the players need to do to be effective, confident, contributing team players. As a young player, I remember the veteran players that helped me make the transition from the Junior League to the NHL, and I hope that I can serve that role for the young players on the team today. In addition to my role with the Rangers, I am also very excited about my new role as General Manager of Hockey Canada’s 2010 IIHF World Hockey Championship team. It is an incredible opportunity and also a challenge to do something special for Hockey Canada, and I am proud to represent my country.