In honor of the 150th anniversary, this blog is going to keep the Civil War related goodies coming for the foreseeable future. With the release of Gods and Generals now less than a month away, I envision a lot of discussion on this board about the film we have waited eight years to see, in its entirety. Until then, please load up some photo paper into your printers and enjoy this little feature I was toying around with. How cool would baseball cards of our favorite Civil War generals be? Perhaps a company will produce a special series down the line, but until then, we have these two, of Robert E. Lee and William T. Sherman, both front and back: 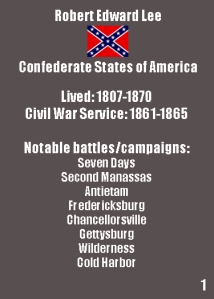 In perhaps my favorite quote of the thousands that have echoed to us in the last hundred and fifty years, Lee perfectly grasps how most generals felt during the War. In the glory of his victory at Fredericksburg over Ambrose Burnside’s Union Army, and seeing wave after wave of Federal troops cut down by Longstreet’s infantry at the stone wall of Marye’s Height, Lee uttered his most famous line. Basically what he is saying is that war would be enjoyable (even fun) if so many people did not have to die.

Considered a hero by some and terrorist by others, this quote from Sherman is one of my other favorites. Infamous for his campaign where he marched from Savannah, Georgia to the Atlantic Ocean, burning and destroying everything in his path, he knew what he was doing was cruel, but he realized that this might have been the only way to put an end to the war that claimed over 600,000 lives.

These cards were photo-shopped in a 2.5 x 3.5 inch format, just like sports cards are. If you really would like to print them out and copying from here is not working, please email me and I will send you the file. Gluing the two sides back to back will produce a real card feel. Enjoy!