Towards the end of the Extended Director’s Cut of Gods and Generals, is a very sophisticated scene, where Colonel Chamberlain (Jeff Daniels) and his wife Fanny (Mira Sorvino) meet the acting troupe fresh off a performance of William Shakespeare’s Julius Caesar, in which world-renowned actor John Wilkes Booth plays the character of Brutus, who inserts the final sword thrust into the body of the slain tyrannical emperor. Co-actor Henry T. Harrison (Cooper Huckabee), exerts a mighty announcement upon the death of Caesar: “Liberty! Freedom! Tyranny is dead.” The scene is in no doubt a foreshadowing, but before it can be dwelled upon, the Chamberlains have been invited by one of the characters to meet Booth and Harrison after the play, and Mrs. Chamberlain asks Booth a very simple, yet thought-provoking question. She says, “Mr. Booth, tell me, do you think of your character as the hero or villain of the play?” Booth is at a loss for words, and consults Harrison before answering, “It is for the audience to decide who is hero and who is villain. We simply play the parts allotted to us.” This quote, however trivial to the naked ear, is the driving force behind the entire film.

The reason why G & G is so brilliant is because it portrays both sides as being right, despite the negative and not-so-truthful reviews stating that the sentiment is stilted towards the Confederacy. Though they indeed get more screen-time, both they and the Union Army are given equal treatment in regards to which cause is the just one in the disastrous struggle of war. The added subplot involving John Wilkes Booth only adds to a film which prompts the audience to think. Students grow up learning that the Confederacy was evil, essentially, and Booth was a psychopathic monster who murdered our 16th president. Because our education system is not at the caliber it should be, questions go unanswered. When I am in a classroom teaching, the point of my presence is not to just give facts, it is to give reasons behind them. You can only bring up the death of a person or group of people so many times and say that it is terrible before people, namely, the young men and women of America, become bored and ask, “So what?”. If you want to spark interest, you cannot go for the what, you have to go for the why.

Why did Booth assassinate Lincoln? Did he just wake up one morning, and on a whim, decide to load his pistol, sneak into the back of Ford’s Theater, and shoot the President in the back of the head? No, it was a slow build-up of events and ideas that lead to his thinking. But no one wants to know about this; no one wants to ask why. There is an American Heritage book on the Civil War that I own from the 1960’s, and the exact words used to describe Booth are “insane assassin”. That is all; one paragraph about the killing, and Booth is given his usual demonized and vilified, and always brief, treatment. The fact of the matter is, Booth was not insane, nor was he a monster, or a murdering robot as the minuscule paragraphs of biased history textbooks portray him. He was, in fact, a man, a famous one at that, who grew heated over Lincoln’s politics and decided to do something about it. While we can all agree that killing a president is far from being right, was Booth, at one point, the most photographed man in America, acting in a moment of insanity or patriotism? That is a question we can answer on our own, after thinking about it for a while, but the portrayal in this film is the most truthful one ever shown in any setting.

Right off the bat in his first scene, Booth is seen as a superstar when he is mobbed by a group of beautiful young ladies who ask for his autograph and quote lines from Richard III, pretending to be interested in Shakespeare, but Booth can tell all they really care about are his attractive looks. Booth has plenty of sex appeal, because he was, after all, the sex symbol of his day. It is hard to fathom, with anyone for that matter, being regarded as sexy when all we have are soon-to-be 150 year old grainy black-and-white photographs. 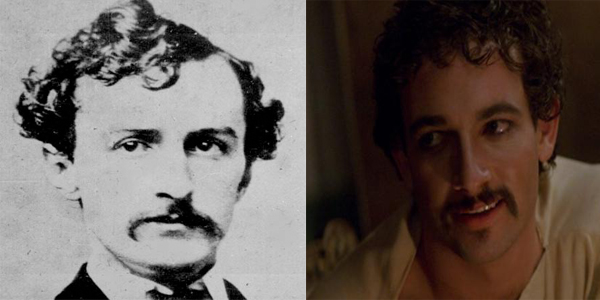 The acting put forth by Chris Conner in the role is nothing short of exhilarating. When you think about it, Conner is not just playing Booth in this film, he is playing Kings Hamlet and Macbeth as well, because of the advanced lines of dialogue in the two soliloquies he delivers. The first, is spoken overlaid with shots of dead bodies on the Antietam battlefield, where Hamlet’s character remarks that he can see a field of “twenty-thousand men” who “go to their graves like beds; fight for a plot.” It is only by extreme irony that in real life, he was giving this performance at McVicker’s Theater in Chicago on the same date as Antietam, the deadliest day in American history, September 17, 1862. Later on in the film, we get to meet Mr. and Mrs. Lincoln, as Mary Todd is raving about Booth being in Washington City for the entire month of April, 1863. The Lincolns have heard how magnificent his plays are, and cannot wait to see his performance in Macbeth. This is an excellent scene, not just for the carriage ride where the Lincoln’s discuss Booth, but the ensuing stage scene. Before it cuts to the theater, Honest Abe says, “I hear Booth does the death scene spectacularly; very physical, wilder than his brother Edwin!” Then, in a classic instance of the tongue-in-cheek humor Lincoln was famous for, he adds, “But that is the one reproach I have of Shakespeare’s heroes.” “What reproach is that dear?” asks Mary Todd. “They all make long speeches when they are killed.”

Booth then is seen on stage, reciting the “Dagger of the Mind” soliloquy. There is a reason why this was chosen, of all parts of Macbeth to pick. It is again ironic, because it works both for historical and poetic reasons. This speech, talks about there being a threat living amongst them, and while Booth pulls out a dagger, his eyes lock with Lincoln’s, who is sitting up in a private box. The overall effect is dramatic, and haunting, with the beautiful and eerie music composed by John Frizzell building up in the background. This is enhanced when you realize that this is reported to have actually happened, and even the ensuing incident, when a stagehand comes to Booth’s dressing room after the performance and tells him that the President and First Lady enjoyed the show, and want to meet him. Rather than come up with an excuse, Booth blatantly tells the man, “You may tell that tyrant, that destroyer of civil liberties, that war monger, that I am in dispose,” before begrudgingly changing his mind to have the stagehand tell the President that he had already left for the evening.

Earlier in the film, Booth is there to give the audience a dose of reality. Well, not really him, per se, but a lady friend he is dining with after Hamlet. He calls Lincoln “mad” for issuing the Emancipation Proclamation, because he believes it will incite a slave uprising, before he is reminded by the woman that the document will only free slaves in rebellious states, the same states that Lincoln had no jurisdiction over. This brief conversation is there to properly teach audiences that the famed Proclamation did not free all the slaves, as we incorrectly learned growing up. If that was the case, slave-holding Union states such as Maryland, Delaware, Kentucky, and Missouri might have seceded from the North, and Lincoln could not have taken that chance. Of course, critics will have something negative to say about this, but since it is actually the truth, I wonder what they will draw up this time.

No other film has ever portrayed Booth in this light, because whether or not you agree with his politics present in those certain scenes, you can tell that he is sincere, and there is no insanity present in his tone of voice; it is just his very strong opinion, which as an American citizen, he was allowed to have. It can be fully expected some people—in all likelihood, the same people who decried the film back in 2003 with overwhelmingly negative reviews—will attack the insertion of these scenes as yet another instance of pro-south propaganda, but it is far from that, because it is the truth. Had The Last Full Measure been made, it would have shown the culmination of the development of Booth’s transformation from angry actor to assassin, thus helping the audience to fully understand why he killed Abraham Lincoln. But unfortunately, the sequel to the trilogy will probably not be made, and we will just have to hope audiences can handle a man with such a diabolical persona being shown in a light that is inconvenient to them, because what do we do, as a society, when someone is a threat to the lies told in history books? We bury it from plain sight. Just as certain figures in Hollywood tried to bury Gods and Generals and see to a quick bow-out eight years ago, it will be brought up yet again as more audiences view this extended cut.

We can only hope that the brilliance of Chris Conner will not be overshadowed. We can only hope that audiences will embrace John Wilkes Booth, if only for four hours and forty minutes out of their entire lives. This film is not selling Booth the assassin, it is selling Booth the man. Sometimes, when hatred is built up against someone over the course of many generations, it is forgotten that they were human once. This movie has now given us the opportunity to absorb that, and catch a glimpse of what he really was like in the years leading up to his tragic final act in 1865.

For additional reading debunking the not-so-truthful history that we grew up learning, please read this article I wrote last year on the real meaning of the Confederate Flag.