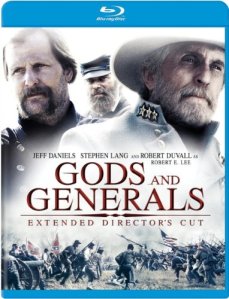 Had I known about this sooner, I would have posted it farther in advance than simply the day of.

While the director’s cuts of both Gods and Generals and Gettysburg were released back in May, with a beautiful Blu Ray Book Package from Warner Brothers, and then again in July as part of a Limited Collector’s Edition, fans who want the two films in just basic Blu Ray will now be able to purchase them starting today. While I do not know why anyone would want to buy anything other than the two versions previously released, this will still serve as a cheaper option, and of course, be packaged in the normal, much more durable plastic case. Another positive is that we will be seeing this film in stores more now, as many do not sell versions of films in the style of packaging it was first offered in (they make you purchase it online instead). This is very important, because exposure is obviously the key to sales.

Upon its release nearly seven months ago (can you believe it has been that long?), the Gods and Generals Extended Director’s Cut has garnered rave reviews, not just for the overall story, but the actual quality of the product on Blu Ray. The visuals are stunning and the audio puts you right into the battle. The film’s official rating on Blu-Ray.Com is currently a 7.3, which is up from a moderate 6.0 on IMDB. If I have not done so enough already, I highly recommend picking up this film, and have to say that this is your excuse to finally go out and get a Blu Ray player!

The one thing that still needs to be done, though, is for both of these cuts to get a release on DVD. Now, maybe they already are planning it and I just cannot find the information, but giving viewers this option expands on the amount of units that will be sold, and also makes it a more viable purchase for teachers and schools who will want to show it in a classroom. Considering that a major reason why these two films were even made to begin with was eduction, this is something that needs to happen, because there are very few schools, if any, that have Blu Ray technology (they also might balk at the price of the Limited Collector’s Set, even though both films and a ton of goodies are also included).

For more information, coverage and interviews with cast-members of these two great films, please visit the Gods and Generals Archive.