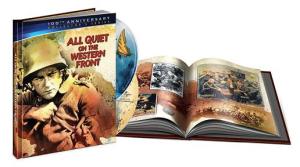 Film enthusiasts and historians, the next few months will prove to be very exciting! For the first time ever, two of the best, most classic movies ever made will be heading to Blu-Ray. The first, All Quiet on the Western Front, hits shelves on February 14th (and will be in DigiBook Packaging). This film, best known as one of the first accurate depictions of what warfare is really all about, premiered in 1930, and shocked audiences with the graphic brutality of war, which was a far cry from the Hollywoodesque romanticism of war that had become a mainstay of theater at that point in time. It was so shocking that it was actually banned in Germany, though mainly for political reasons, and its unflattering portrayal of a losing German Army, the nation blamed for starting World War I, which was punished severely by the Treaty of Versailles in 1918. The second of these films is one that deals with the luxury of the most famous ship in history, the Titanic, and the subsequent disaster of its sinking, in one of the most accurate tellings of the story, based on the book by legendary author Walter Lord, titled, A Night to Remember. This film will be released a month later, on March 27.

Both of these films are two of my favorites, and both equally deserve the restoration they are going to receive, not just for film history, but world history all together. I consider All Quiet on the Western Front to be a physical part of history, because of the groundbreaking nature of its release, and because the battle scenes still hold up to today’s standards. The only qualms with the film I have are the actual faults in the film quality, as present on the DVD version that I own, which is probably standard on everyone’s. The film is now more than 80 years old, so it definitely has its share of wear and tear, but some scenes are just painful to watch. One can only hope that Universal Studios went the extra yard to spend an adequate amount of money on film experts to make for the ultimate viewing experience. If there was one film ever made that deserves such attention to detail, this is the one.

As for A Night to Remember, the previous qualities seen on DVD are actually quite good, thanks to the Criterion Collection, which I have lauded several times on this blog for their preservation of such an eclectic group of films, both American and foreign. While the above-mentioned film needs restoration to merely save itself, this film’s enhancement should just be an added bonus, because there really were not that many kinks in the film quality at all, at least not that I remember from about a year ago, when I last viewed it. You can also rest assured in its handling, because Criterion will once again be conducting the transfer, and so far, every Blu-Ray release of theirs that I have seen has been stunning (The Battle of Algiers will blow you away). This is one of my favorite films, even more so than All Quiet on the Western Front, though I consider myself a war film buff more than anything else. Something always struck me about the acting and imagery here. There are no major stars, save for the always wonderful Kenneth More (who has minimal lines in the star-studded The Longest Day, yet still utters my favorite: “What are you two doing standing over there chatting? This isn’t Hyde Park Corner! There war’s over there!”) but it does not seem to matter, because of the performances director Roy Ward Baker was able to sap from his actors. Everyone, from More as Lightoller, to the players of Captain Smith, J. Bruce Ismay, and builder Thomas Andrews, are convincing and delightful to watch. Also, keep in mind that this 53-year-old movie has not aged a bit, even with the camera-trickery effects of the actual Titanic’s sinking, and you have yourself quite the viewing experience!

Are you excited for these two films to hit the shelves on Blu-Ray? Share your thoughts in the comment section below!