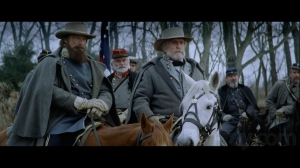 Since released in May, the director’s cut releases of both Gods and Generals and Gettysburg have garnered rave reviews, as the missing pieces of the enormous puzzles were finally put in place and made available to the general public. In many articles, we have read that sales figures for these two films have been good, but just how good, exactly? After browsing on Blu-Ray.Com, which has become a daily read for me, I just happened to scroll down the right side of the page to view the top-sellers for the United States, and lo and behold, there was the Limited Collector’s Set of both films that was released in July, sitting at #3 overall (with a total, worldwide sales rank of 23). This definitely came as a pleasant surprise, if not complete shock. This was no mirage or speculation, but actual statistics detailing the success of these two films. The LCS also currently sits at #1 on Blu-Ray.Com’s best bargains list, where you can now purchase the massive boxed set, loaded with extra goodies, for only $36.49

This set trails only The Twilight Saga: Breaking Dawn Part 1 (which is on pre-order since it has not even been released yet) and Moneyball, which came out just last week. With such a diverse group of titles sitting amongst the top 20, it is, in fact, the only historical drama present there, unless you count season one of HBO’s Boardwalk Empire as history, which comes in at #11. If you take some time to look at this list, the duo of Gettysburg and Gods and Generals has outsold The Lord of the Rings Trilogy Set (which came out last June) and even the complete Star Wars saga, probably the most hyped-up Blu-Ray release of all-time.

For all those who felt, or still feel, that the Civil War cannot be a moneymaker, they must think again. Granted, theatrical figures have never been impressive for any film of this genre, and the running times of these two made it difficult, but the overall interest is indeed there, and should open up some eyes, hopefully those of producers looking to get in on the action. This begs the question to be asked: is there still hope for The Last Full Measure? Director Ron Maxwell told me himself in July that he works on it frequently and it is not forgotten, but all that hard-work may be for naught without the big bucks. One of the main reasons why we even saw director’s cuts of these two films is because DVD (and earlier, VHS) sales had always been enormous. That sentiment, combined with the 150th anniversary of the War, is what led to the two long-awaited releases back in May. Perhaps this is what is needed to get the ball rolling on the final installment of the trilogy. One can hope, right?