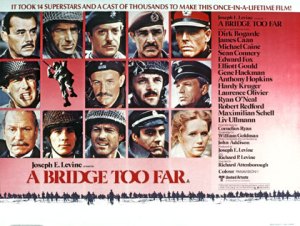 Let’s just say that I’ve been on a World War II kick of late, which gives me occasion to post my first movie review in quite some time. Heck, I might even go out and get a pack of Luckies since I’m in such a good mood. So, anyway, it seems that one cannot be considered a war movie buff unless they have watched the 1977 WWII epic A Bridge Too Far. Now that I have finally watched it, my journey is complete, and I must say, it was well worth the lengthy wait. Despite its obvious flaws, many with casting, it is still an outstanding film and one of the best war movies ever made. I consider this to be a companion to an earlier made film, The Longest Day, though the two are not officially connected in any way in regards to the production. However, both are based on novels written by the same author, Cornelius Ryan, and both took the same approach to actually making the film: have a sense of scope that is unmatched for the time, strive for the utmost historical accuracy, and of course, acquire every big name actor you can, pay them whatever they want, and find a role for them. While both films suffered nominally because of the last part, that really is the redeeming quality they have that gets people to say, “Gee, they don’t make movies like that anymore.”

Just take a look at the casts of both films for their respective time periods, and your jaw will drop. When a production goes through such lengths to put forth an all-star cast, they take a tremendous risk. You just know the majority of roles are going to be nothing more than cameos, because a film can only have so many stars, but it also allows for the possibility of having someone completely bomb the part they are given. In The Longest Day, many critics pointed out how legends John Wayne and Robert Ryan were too old for their respective parts, especially in Ryan’s case because he was nearly 30 years older than what the real General James M. Gavin would have been at the time. However, these are probably the same people who would then complain about the young sex symbol Ryan O’Neal being cast in the same role, for A Bridge Too Far, because he looked too young and out of place. You can’t have it both ways, which is why O’Neal does not bother me as Gavin, especially when you put their two pictures together and see that they actually bear quite a resemblance to one another. The second miscast that people point out in this film is Elliot Gould as Colonel Stout, and despite being a fan of his performance in Capricorn One and a guest appearance in the final season of Law & Order, I will agree with them. I wanted so much to like him here, but he just could not pull off a military character, if not in body, but in voice–it was not deep and rugged enough. Him shouting orders was more like screeching than anything else.

In getting to more of the cast, how can one not fall in love with a team of Sean Connery, Michael Caine, Dirk Bogarde, and Anthony Hopkins, for the British side? Each is spectacular in their role, especially Connery who steals the show, in my opinion, and the always humorous and cheeky Caine, who does a fantastic job as Colonel Vandeleur. As for Bogarde (General Frederick Browning), who plays the co-creator of Operation Market Garden, of which the film is based, I must say that if his portrayal is accurate, which I will assume it to be, considering the film was helmed by legendary British director Richard Attenborough, then he must have been one of the most incompetent generals to ever serve in the British Army, or at least that is the impression I have after basing it on the sample space provided by the failure of the Operation, though it is said at the end of the film that Commander Montgomery deemed it “90% successful”. The film, however, does not leave you with any feeling of success whatsoever, if not quite the opposite.

While there are some very humorous lines, overall, this is a film that tells the story of an operation that was doomed from the start, by poor leadership and just plain bad luck. Operation Market Garden was going to be one of the many operations that would “end the war by Christmas”, because thousands of paratroopers would be dropped behind German lines in Holland, capture several bridges, the last and most important being at Arnhem, while infantry and tanks come down the roads that lead to the bridges and alleviate the soldiers there, some of which would have to hold out for up to three days. This was not going to be a problem, though, because according to allied high command, the only resistance they would meet would be “old men and boys”, because there were not many German regulars in Holland. Well, it just so happened at that exact time, two Panzer divisions were sent to the area near one of the bridges for rest and recovery, unbeknownst to the allies, which ultimately led to the disaster, and shocking those involved in the fighting. There were many obstacles, though, and in the end, Arnhem was never taken, and less than 2,000 of the 10,000 British soldiers sent there made it our alive or un-captured by the enemy. Throughout the film, the reactions of many of the characters to this plan give you the feeling that you know it is going to fail, regardless of whether or not you even know the outcome from history. Ryan O’Neal as Gavin and Gene Hackman as the Polish general, Sosabowski, are full of doubts that rub off on nearly all of the major characters, except for Browning, who still wants to commit to the operation, even after having to start it off by landing the paratroopers in daylight, miles away from their intended targets. From that to narrow roads and radios that refused to work, chalk this up as one of those tragic flaws of World War II.

As for the rest of the cast not yet mentioned, the German leads consist of Hardy Kruger and one of my favorites, Maximillian Schell, who are both convincing in their roles. Also throw in Wolfgang Preiss, who has a short part in the beginning, one of two actors who were also in The Longest Day, the other being Sean Connery. For the Americans, we have James Caan as a tough yet caring, on-the-edge sergeant who has one of the most memorable scenes in the film, regarding a fellow soldier friend and a stubborn hospital doctor (don’t want to ruin that for you), as well as Robert Redford, who reportedly received $2 million for his cameo that consisted of nearly five minutes of screen time, as Major Cook, who has to lead a daring attack in rowboats across a river in daylight to capture one of the bridges. Lastly, we cap off this all-star cast with one of the best actors to ever live, Laurence Olivier, as a doctor from native Holland, who cares for wounded allied soldiers.

If there is anything that would set this film apart from The Longest Day, it would be the nature of the battle scenes. While the overhead, far-away shots of the D-Day beach scenes are hard to top, what A Bridge Too Far lacks in scope it makes up for in gore and realism, which is something that would not have been possible for the former of these films, because of stricter censorship in the 1960’s. For a PG rated movie, this has quite a bit of blood and language, but it is not gratuitous like war movies made today. As I said earlier, these two films should be viewed as companions, because they are both very historically accurate (many of the small scenes, such as Caan’s incident in the hospital tent were real as well) and loaded with stories that you would never read about in history books. Besides that, without the success of D-Day, Operation Market Garden probably would have never happened.

Despite its flaws in casting and the very poor quality of the DVD (Blu-Ray is supposedly a lot better, and some reviews said that it was not even thought possible to have seen the film quality rescued in the way it was), I will give this an 8 out of 10, because of the interesting plot, constant switching from military tactics to actual fighting, and giving both sides ample time (with characters speaking their own respective language with subtitles, something I most definitely look for in a film like this) to explain their rationale for fighting, really gives insight into why the outcome of this operation ended the way it did. Just look at the cast and running time, and yes, this becomes one of those films that could probably never be made today, and thankfully, it does not have to be. A Bridge Too Far will be able to hold its own for many years to come, just as it has for the past thirty-plus.