“I bet you’re inundated with people asking about that Gettysburg episode from Haunted History, aren’t you?”, I asked the lady working in the Ghostly Images section of the Soldier’s National Museum, since the building, an old orphanage, was featured prominently in the episode. “Oh, yes!” was her response. The lady who was there today was named Karen, and we chatted for about fifteen minutes about the history of the building, as well as her own personal experiences. I’m sure she gets asked a lot, but I told her that I work at a haunted museum myself back in New Jersey, not to seem like just another one of those “tourists”. Anyway, she told me of a few occasions where the wind chimes and pendulums for sale there would swing on their own, with no one walking nearby, nor a blast of air hitting them. In one instance, two of them hit each other so hard that they got locked together. While this was interesting, it was what she showed me next that was even better, something that was not featured on the Haunted History episode, even though it was very relevant to what they were talking about. Perhaps, you could say, this is even an online exclusive.

Most people know that the building was an orphanage back in the 1800’s, one that bore witness to unspeakable horrors at the hands of a cruel headmistress. Because of the building’s use, we can gather that if there are any spirits there, children would be prominent among them. She directed me to the main wall in the gift shop, painted red, and a spot that was just about a foot off the floor. I noticed three streaks within the paint, like someone had smeared it with their fingers. She told me that years ago, when they had painted the wall, they came in the next day to find the three “fingerprints” in the paint. The odd thing was that only two people had a key to the building, she said, and neither came in during the middle of the night, and certainly never touched that spot on the wall. The painter was rather annoyed at the anomaly. Because it remains nearly hidden under a shelf, unless you are at child height, I suppose they left it as a souvenir of sorts, from one of the orphan ghosts who was playing around and wanted to leave their mark. 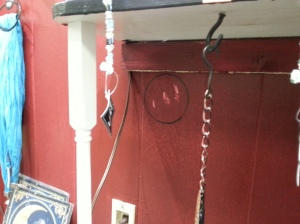 My conversation with Karen was very informative, and she was very nice and full of interesting little tidbits. She also told me that the Homestead Inn next door was actually once a part of the orphanage and was used for overflow. Its original location sat further back than where it sits now. The house was moved in later years when the time period called for it to be “fashionable” to live closer to the street. Thank you Karen for a wonderful visit!