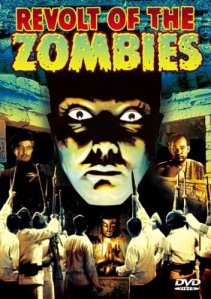 When one watches an awful movie, you must ask yourself a couple of questions: 1) “Is this movie so bad, it’s actually good?” and 2) If the movie is old, “Would this have at least been considered good for the time?”. Usually, a movie like Revolt of the Zombies would garner at least one yes, and therefore allow the 65 minutes spent watching it to not be a complete and colossal waste of time, but this film does not seem to fall into either category: it’s just plain bad, and would have been considered such even when it was made back in 1936. Because today is Halloween, I thought I would kick off my annual movie marathon last night with a midnight viewing of a really old zombie movie. I did the same last year right before Hurricane Sandy slammed into us and left us without power for a week, only the flick was called King of the Zombies (1941), and actually wasn’t half bad. I had no such luck this time around, as I found myself several times picking up the remote and contemplating whether or not I should just shut it off and go to bed. However, the movie aficionado in me said, “Greg, it’s barely more than an hour. Stay with it!” So I did, and I would like to punch my subconscious because of it.

Revolt of the Zombies intrigues in title only. Simply put, this is a bad movie that jumps from place to place with no rhyme or reason whatsoever. It actually begins on the front line in France during The Great War, and for some reason, a Cambodian priest was able to get involved with the French army, where he turns people into zombies to create the ultimate fighting force that cannot be defeated. There is more than enough time given to a group of French armchair generals (almost reminiscent of Georges Franjou in Paths to Glory) but since only one of them tries to speak with a French accent, it is easy to see right through them. There, they discuss the morals of a zombie army, and how even though they want to win the war, it would be a risk to the human race to do it with zombies. The Cambodian priest is then sentenced to life in solitary confinement, and a journey to Cambodia will shortly begin, so the generals can uncover the secret and destroy it. Before that, though, there is actually a battle scene on the front lines (if you can call it a battle scene) where we see a group of five comatose Cambodians marching towards the German line, which apparently only has one soldier defending it…and with a pistol, where he empties said pistol into their bodies and notices they do not die. He then flees in a panic (Vive la France!). This was the best scene in the movie, all excruciating, laughingly bad 20 seconds of it, and I would surmise that 90% of the budget was spent on this one moment alone.

Anyway, back to the journey which will become central to the…uh…plot (it pains me to say that). I found it comical that these French generals would leave their headquarters in the middle of what was the largest war in human history at the time to trek to Cambodia, where they are then all seen as archaeologists who all have training in the field, just to find a rock with a zombie-turning inscription on it. Have I lost you yet? Good, now you know how I felt watching this entire movie. We are then met with a slew of events that all happen without explanation. First and immediately, one of the main characters, played by Dean Jagger, falls in love with a woman named Claire (Dorothy Stone). Obviously, much of their “getting to know each other” was skipped, because the next scene after them just having a conversation is them at their engagement party. Ah, but what would a bad movie be without a senseless love triangle? Enter Robert Noland, whom Stone then falls in love with and breaks the engagement over. This sets the stage for the final few actions, which includes Jagger finding the secret to zombification and who he attempts to turn into zombies thereafter.

I am not going to give the ending away, because I do not want to ruin it for you. However, I do want to mention the utter ridiculousness of the actual zombification process as depicted in this masterpiece. Jagger turns his servant into one by mixing ingredients and making him inhale the smoke. But just moments later, he is able to create an entire army by just thinking about the individual and concentrating on them—they too become zombified. I guess the producers ran out of the initial ingredients. See, shouldn’t have spent all that money on the German dude’s pistol! The movie tumbles to an “end” with Jagger trying desperately to get back Stone’s love, but she says she will only be able to love him if he releases all his victims from the zombie-like grasp. He agrees, and when they wake up, we have the reason for the title of this movie: they revolt! These last few shots of former zombies running around the palace looking for people to kill are hilarious. The music plays with an intensity and their faces are supposed to shake you to the core. The only shaking I did was out of laughter.

Victor Halperin’s Revolt of the Zombies is a hodgepodge of rubbish. It fails to entertain or scare. It fails to even tell a story, because there are so many subplots and loose ends present in this barely one hour-long train wreck that you would think it was directed by Ed Wood’s evil twin. The only person I would recommend this to would be a zombie junkie who has to see everything in the genre. No one else would find enjoyment, unless you are looking for a way to put yourself to sleep. The acting and special effects are worse than the editing, of which I had to check the credits to make sure there actually was an editor hired onto the production, because anyone can just turn the camera off after every scene—to call it choppy would be an insult to the worst movies of the world. My final rating would be a 2 out of 10, and it only goes that high because of a semi-interesting World War I tie-in, but even that facet was butchered into oblivion. The movie does succeed in one thing, though: in only 65 minutes, it manages to recreate the eternity that all zombies are condemned to be imprisoned in.