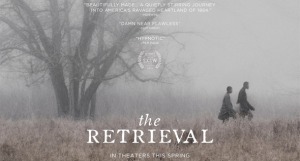 With more than a hundred film credits to his name, actor Bill Oberst Jr. is a well-known star on the B-level horror circuit, cranking out what seems like an endless amount of movies every year, each one portrayed with his legendary creepiness. He has been honored by almost every horror movie organization out there, and has even been nicknamed the contemporary “Man of a Thousand Faces”. Even with solidifying himself to a genre where he is instantly recognizable, Bill is no stranger to American history, and the Civil War in particular. In 2007, he played Gen. William Tecumseh Sherman in the History Channel documentary Sherman’s March, and in 2012, more comically, he appeared as Abraham Lincoln in Abraham Lincoln vs. Zombies. Even with such a title and content, Bill was determined to play Lincoln in a dignified manner, because as he explained when I interviewed him two years ago, “I really don’t like to see historical figures played for laughs and stripped of their dignity. As I saw it, I had been given a chance to play one of America’s great heroes and I was going to do that, regardless of the bizarre context. So I guarded the character against anything that would make him look ridiculous…”. Now, after many horror films in between, Bill is set to return to the screen in a “normal” role, again, in a Civil War-related movie called The Retrieval, which was made last year and has had a limited release, but is hoping for a broader one this coming spring.

The Retrieval is going to be a change of pace for Oberst fans, used to seeing him playing twisted, horrific characters, laden with make-up effects and blood. Some of his performances as “normal” characters have not went over well with critics, but that is where I find disagreement with them. One role in particular, A Haunting in Salem, which even Bill himself felt that trying to play a regular guy just was not in him, I found to actually be enjoyable. Rather than maniacal or scary, Bill was subdued and reserved, playing the role of a modern-day sheriff in the midst of violence with professionalism and caution. Immediately after watching it, I realized it was the only aspect of that downright awful movie that was any good, so it made me very surprised to find that fans did not feel the same way. In any event, I have full faith in Bill that he will do a great job once again in a somewhat “normal” role in this next film, where he plays a bounty hunter who dispatches a young boy to help find a freed black man who is wanted down south, though his demeanor does appear to be very dark.

Yesterday, I spoke with Bill, who is named Burrell in the film, and he had this to say regarding the project, “I’ve watched The Retrieval with audiences multiple times now, and after every screening people make variations on the same comments: ‘This belongs in theaters’, they say. ‘It touched my heart. ‘This is the kind of movie people want to see. Why isn’t this in theaters?’ Chris Eska has made a beautiful, evocative motion picture that makes people feel and think and hope. The word ‘honored’ gets thrown around a lot in this business, but it is the only honest description of my feelings about being a small part of The Retrieval. It’s a film that means something. I harbor high hopes for it’s success.”

While the movie does exhibit a low-budget feel, the trailer reminded me of a cross between 12 Years a Slave and Ride with the Devil. The color-tone is dark, and the acting, which also includes Ashton Sanders and Tishuan Scott, appears to be top-notch, and there does seem to be the inclusion of a battle scene as well as life in slave quarters, which will certainly appeal to history buffs. Fans of the Civil War genre are always starved for entertaining, historically accurate films, and while I cannot yet attest to the latter, Chris Eska’s The Retrieval definitely looks like it will surprise with a very gripping, moving storyline and I hope it makes its way into a theater near me.