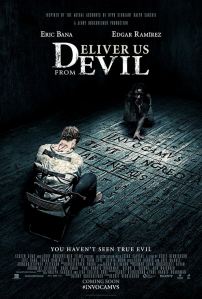 Demons! Demons everywhere! In a way, I blame the Discovery Channel series A Haunting, when back in 2005 or 2006, their episodes started to drift from ordinary haunted house stories to those of evil entities and demonic possession. From that moment on, no house was ever subject to a regular, good old-fashioned haunting by ghosts, or spirits of deceased owners or those who died on the property. No, every haunting was caused by evil spirits and demons, who brutally oppressed the bewildered new owners, and, more often than not, possessed them. Every episode, save for the characters and setting, was nearly identical, with a priest of various faiths being called to the residence within the final third of the show to drive the demons out of the person or house. The people would then talk about how the atmosphere or energy in the house was “lighter” and then they move on with their lives, all happily ever after, of course. Being a paranormal investigator, and a realistic one at that, I do not have to tell you how utterly preposterous those episodes are, because if the small and random sampling of “hauntings” as seen on the show were an accurate percentage of all those whose houses are actually haunted, being an exorcist would be a full-time profession and a multi-million dollar industry.

In all my years of investigating and networking in the paranormal field, I have only encountered what I believe was a demonic entity twice, and even then the skeptic in me remains vigilant. As for all the people I have met, investigators with various amounts of experience throughout the country, I do not know a single person who has encountered a demon, or know someone personally or have heard tell of a person being possessed or oppressed by a demon. While I believe that evil spirits do roam the earth, possession is not as simple and care-free as popular culture portrays it to be. If it was, we would all be spitting green-pea soup. I do not put the blame on Hollywood, but more towards television. A Haunting was one of the first docudramas to actually lend credibility to the field. It provided reenactments, eye-witness accounts, and the chilling narration of Anthony Call. But then they went too far. Every episode was demonic, not just a ghost. Everywhere you turn, there was an exorcist or shaman with special healing powers that could save the day. It no longer became frightening, but sad. A once fearsome genre that many do not even like to think about was now tired, predictable, over-used, and highly unrealistic. But what caused the change? Did viewing audiences simply get bored with ghosts? Are they not scary enough?

In the last ten years or so, we have seen a myriad of demon-themed horror films. In the history of film, only two ever came across as well-made and credible: The Exorcist, of course, which I consider to be a cinematic masterpiece, and The Exorcism of Emily Rose, which actually scared me more than the first I mention, at least at the time given my age. It could have ended there. No movie ever made involving a possession can ever differentiate itself from The Exorcist. It is impossible. This film laid the groundwork for the demonic sub-genre for time immemorial. We see what was presented back in 1973 over and over and over again. The same candy, merely in a different wrapper. The only thing that is different is that no one else has ever come close, except for Scott Derrickson with Emily Rose. Since then, we have had mainstream Hollywood movies attempt to replicate the same story ad nauseam. The Devil Inside. The Rite. Paranormal Activity. Exorcist: The Beginning. Dominion: Prequel to the Exorcist. The Last Exorcism. The best part about that last movie is they made a sequel three years later with the same title (just a “Part II added”) meaning the “last exorcism” wasn’t exactly the last exorcism, was it? How many other movies did I miss in this genre? Those were just a few. There are probably a hundred more.

All films also use the same special effects, too. The victim is usually a girl (thanks to the precedent set by The Exorcist) and always has long hair, which can creepily drape in front of her face (stolen from The Ring) to hide the jump-at-you CGI effect that is to come, as she staggers toward you while bent over due to the oppression by the demonic force. Maybe her eyes will glow. Maybe they will be solid black. Maybe her jaw will almost unhinge from her face while a computer-generated black mist slithers out of her and immerses the scene and she unleashes a blood-curdling growl. Maybe she will crawl backwards and upside down, or even cling to the ceiling. Of course, nothing is better than seeing her head spin around in a complete circle! Where have we ever seen that before? In every story, the priest says how rare and difficult it is to get church approval before conducting an exorcism, yet they get it every time!

And now another film is slated for release, Deliver Us From Evil, another one of those “based on a true story” films which will bear nothing to the reality of the true story, if there actually was one in the first place. And why not? Why not keep making these films? They garner horrific reviews and ratings yet they make money. They have even created celebrities. Priests who conduct exorcisms are now being signed to book and film deals (whatever happened to a vow of silence or privacy? You know, your duty as a priest?). Paranormal investigators and others with interest in the field are coming out of the woodwork with “demonologist” as their title. While the Warrens used that moniker years ago (and deservedly so, based on those who knew them), it seems that everyone is one now! Read one book on demons, and then declare yourself an expert. Who is to disprove you?

This is just another nail in the entertainment coffin. A theme run amuck. Originality is dead, no more evident than with the horror genre. Just take a look at TV. “Ghost hunting” shows are coming into contact with demons at great regularity now, when that never was the case. Either demons exist in greater numbers now, than say, ten years ago, or these shows change with the times, therefore proving they are fraudulent, and for entertainment purposes only, and not legitimate ways of gathering evidence as they claim. Popular culture needs to take a break from this genre, one that they killed themselves. There is nothing new left to be discovered. Leave it alone and move on, driving a stake through its heart as you go. Oh wait, wrong creature.