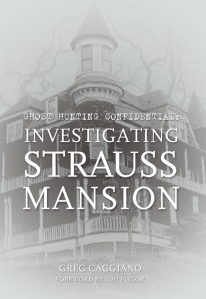 As you may know, I will be having a book published and released this coming September. Perhaps it was fate that led me to this publication, because just a few months ago, not only was there no book written, but I did not have any aspiration to write one after many frustrating attempts to get something done all ended in failure. I either finished a manuscript and never had the drive to edit it and send it in to try to get it published, or started on a tear and cranked out a lot of pages before losing interest and not completing it. This spring, when my computer crashed and I lost nearly every document I had written in the previous seven years, my mind was pretty much made up for me: it’s just not in the cards—focus on something else, Greg. My paranormal investigating hobby has kept me extremely busy. So I focused on that. I have also found a home at Strauss Mansion, working for their board, and being the go-to guy for paranormal investigations. After several very successful public investigations and lectures there in May, it dawned on me: I have enough notes, stories, and experiences written down about this place that I could very well have a book here. I started typing them up and throwing it all together. It was not exactly long enough, but with a few chapters on background information on ghost hunting methods and technology, as well as a brief history of the hobby and some thoughts on popular culture, I realized why yes, yes I do have a book here.

On the first Monday in June, I proposed the idea for a book about Strauss Mansion’s ghostly side. Pretty much everyone was on board, even those who do not believe in ghosts, because they recognize that a book like this, and related events, will bring people to the house and stir up interest, and of course, bring in much-needed funding that every museum and historical society needs. It literally was that simple: the idea was brought up in June, the book was heavily re-structured and edited by myself through that month and into July, and by the end of that month, was being looked at by our president’s team of interns and graphic designers, who came up with the wonderful cover and some nice illustrations throughout. By August, the proof was in and waiting for opinions and corrections by the board, and here we stand now, with printing due to happen in the next week or so, with a September 7th release date. The book is titled Ghost Hunting Confidential: Investigating Strauss Mansion, and will sell in paperback at 60 pages for $10. All of the proceeds go to the historical society. That was my only request: if they paid to publish it, in turn, I would not take any money once it sells.

During this journey, I have gone through many emotions: excitement in realizing that I am getting a book published, stress and frustration during the many hours of editing and tweaking, disappointment in realizing that 15-20 pages were cut from the final proof, and acceptance in realizing that damn near every writer or director gets material cut from their projects, no matter how good they may be. In the end, I am looking forward to September 7th, and hopefully seeing a lot of people at Strauss Mansion for a book release event where I will be present to sign copies. It is going to be a special time, so if you are in the area and have an interest in this, please stop by between 12am and 4pm and pick up a copy for yourself [and ten or twenty friends]. If you cannot attend, rest assured, the book will be for sale at the house year-round. If time allows (and I imagine it will, since I’m not exactly expecting a line out the door), my ghost hunting team members and I can show you around the house, pointing out some hot-spots found during our investigations. If you are not local and still wish to purchase a copy, please email me at nyr1199@comcast.net and we will proceed from there (just add an additional $5 for shipping & handling).

Lastly, for those of you who end up reading the book, the event mentioned in the epilogue really did happen, and was not exaggerated or added just to increase the drama. It literally happened as this book was entering the final stages of proofing, which is why I could not integrate it into the book, and just left it as a separate story at the end. No, it is not even a paranormal experience, but it is quite juicy. That’s all I can say for now, as to not spoil anything, but let’s just say that if I were to ever write a sequel, it would pick up right from there, because it led us to something interesting.

More information can be found here.