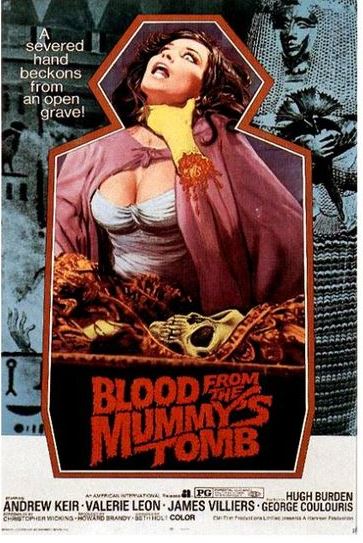 I’ll make this short: read my review of The Awakening. It’s pretty much the same movie, since they were both based on Jewel of the Seven Stars by Bram Stoker. For the lazy, here’s the gist: an archaeologist (Andrew Keir) discovers a famous mummy, only the body never deteriorated. It is in perfect condition, kept in a state of “suspended animation”. His wife gave birth to his daughter (Valerie Leon) at the exact moment the tomb was opened (this is not depicted, unlike the other movie) and died in the process. The daughter grows up to look exactly like the mummy. The spirit of the mummy then takes possession of her, causing a series of murders, leading to an eventual attempt at a full resurrection of her body. It’s really not any more complicated than that.

Blood from the Mummy’s Tomb is set mostly in England, and during the present, whereas in The Awakening, the movie begins with a flashback to when the tomb was discovered in Egypt. This older version also has a subplot involving a man in an insane asylum who could be compared to a Renfield-type character—a man driven mad because he knows too much about something.

Any killings in this movie are repetitive and cheesy. The acting is no better or worse than other similar British-made horror movies from the 1970’s. However, you could tell that Hammer was starting to falter. This just does not have enough terror to chill anyone. There’s a severed hand that crawls (for lack of a better term) around in random scenes which will probably cause you to laugh rather than shriek in horror. Both movies suffer from many of the same maladies: no scares, a story that’s all over the place, and death scenes which are simply not well-made. I have not read Stoker’s story, but I am inclined to believe that it is probably too complicated to be made into a movie, which is why both version I have seen (there are a couple more) are spectacular failures. It’s better than The Awakening, but not by much. 5 out of 10 stars.

Also starring James Villiers, Hugh Burden, and George Coulouris. Directed by Seth Holt (who passed away during filming and was replaced by Michael Carreras.

Ghosts on the Coast Web-Series