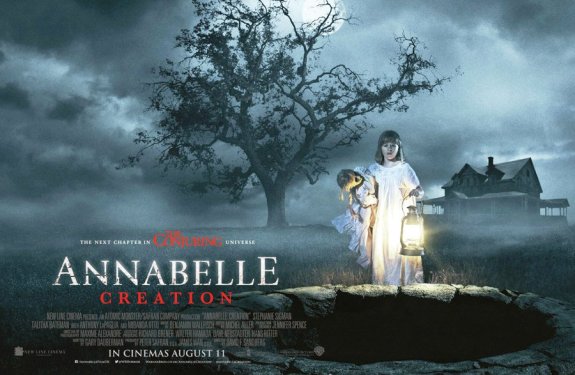 Having just called Annabelle (2014) a stain upon the Conjuring franchise for ignoring the real story of the Annabelle doll and choosing to go with something truly fantastical, here I am ready to rave about its prequel made three years later, Annabelle: Creation. This film too chooses to ignore most of the Warrens’ story regarding the possessed doll, but at least through a few twists, turns, and nods, it manages to feel right at home in the Conjuring universe. Actually, it was so good, this should have been the first Annabelle movie. It was so good that it renders its sequel pointless and useless.

I actually could not believe I had not heard of this movie until I was digging around after my last movie review. I do not remember any hype or this even hitting theaters. I enjoyed seeing Anthony LaPaglia again. He disappeared without a trace after having the lead role in the series Without a Trace for seven years. I had wondered what he had been up to. Apparently, his journey has taken him into the horror genre.

LaPaglia plays a doll maker who suffers through the tragic death of his daughter who was hit by a car. We later learn that he and his wife made a deal with the devil of sorts: they prayed to “whatever force would hear them” to be able to see their daughter one more time. As it happens, they start having visions of their daughter around the house and she becomes more forceful by the day. She then convinces them to let her move into a large wooden doll (the Annabelle doll he crafted) so that she could stay with them “forever”. Desperate out of love, they give the spirit permission. What they don’t know is that this is not actually the ghost of their little girl—it is a demonic entity who tricks them. This is the same force seen throughout the Conjuring franchise. This thing is unleashed 12 years later when LaPaglia opens up his home to a nun and her mini traveling orphanage. The little girls with her unknowingly open the door (literally) for this demon to manifest. There is even a tie-in (or two or three) to the demonic nun character seen in the second film and currently having her own biopic (if I can call it that) in theaters.

So, in short, Creation feels right. It belongs in this universe. That and it is just downright scary. There are a few jump scares, but it does not entirely rely on them. The imagery, even when you know it is coming, will still cause you to shriek. I watched this late at night before going to sleep and it was more unsettling than I imagined it would be. Horror films do not really get to me anymore. It appears that only those in this franchise still cause me to leave the light on just a little longer before going to sleep.

The special effects are top-notch. The acting is just right. The nun character (Stephanie Sigman) we have here is kind and “hip”—she genuinely loves the children she watches over. It is a change of pace from current horror films depicting them as either possessed or totally human and just downright sadistic. I am also a big fan of the pacing of this movie. At nearly two hours long, it has the ability to take its time. The story unfolds slowly and deliberately. There is no rushing to cram this and that and throw in jump scares every two minutes. Instead, this is a well-crafted horror film that actually has a good story. It is rare that a prequel made after the fact manages to outdo the original. Creation makes you want to forget the original was even made. 7 out of 10 stars.